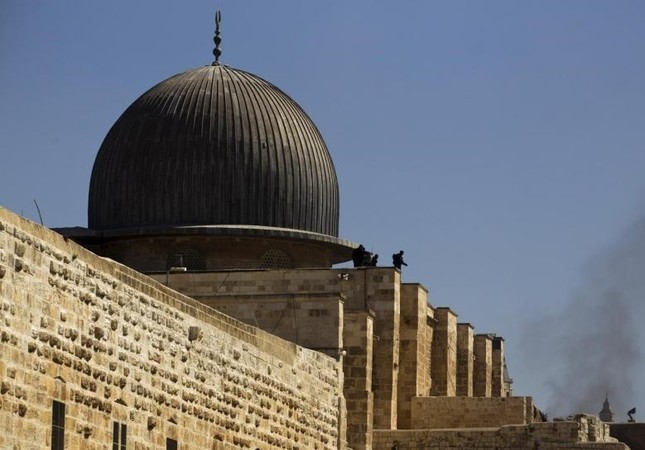 Our research is based on careful scientific care on historical facts concerning Palestine-al-Quds in History, which we have been assigned to prepare this book PowerPoint presentation,  in composition, preparation and execution, as a good introduction to al-Quds the cherished on the occasion of its festivity as the Arab Capital of Culture 2009.

“Palestine-al-Quds in History: Some of Splendors

of the Civilization of Human Being, Culture and Resistance”

This Video includes a historical research documented with a variety of rich and main sources  that concern with Anthropology, especially the historical, archaeological, linguistic and chronologic discoveries, whose uncovered falsification of the Zionist allegations, plus of course to the other important references.We depend on the works of part of the western specialized orientalists, who looked, even a little, on what were discovered of  old boards and manuscripts, and who were distinguished in the civilization of objectivism in their free scientific mind, which pushed them to show much of the facts that expose the level of in the falsification in the human history in general and Arab history in particular, including Bilad al-Sham. So particularly, we appreciate them with the numerous institutions that concerned with the Palestinian studies.

Our research is based on careful scientific care on historical facts concerning Palestine-al-Quds in History, which we have been assigned to prepare this book PowerPoint presentation,  in composition, preparation and execution, as a good introduction to al-Quds the cherished on the occasion of its festivity as the Arab Capital of Culture 2009.

This Video,  through  documented  objective  scientific  research,  assures historical  facts,  which firstly confirm Arabism of Palestine and its heart al-Quds, in land, human beings, history, culture and civilization in particular, and it presents some of the most beautiful and modern splendors of the culture and resistance in them. In addition to the facts, which secondly confirm some of the most important manifestations of specialty of the civilized givings of the culture of Arabism and Islam in general, and its affected role in urbanizing the world, which was controlling till the outbreak of the industrial revolution in the eighteenth century.

Our historical research is a correction of the truth of the Arab culture and it at first concerns al-Quds-Palestine the capital of this culture in 2009. Here it follow its tour through the history by showing some of the most important splendors of the civilization of human being, culture and resistance in it, and through our commitment to the mentioned objectives in the light of its following main starting points:

First: the commitment to objectives of festivity of al-Quds as the Arab capital of culture 2009, to assure the consecration of its historical and political dimension as a capital of the independent Palestinian State, its place in the human religious conscience, its Arab cultural identity, and to support its peoples and enhance their steadfastness and facing and stopping the works of Judaizing it.In addition the commitment to the general mentioned objectives of the general decision of the festivities in 1995, in order to show aspects and data of the Arab cultural unity in its human and civilized content. Second: the commitment to this human civilized content of the Arab culture. Third: the commitment to civilizations of the culture and objectivism, what means the credibility,  and includes the satisfaction to respect the cultural diversity, which exists in every country in the world, and it does not disagree with the existence of the unit of native and national culture of this country or that. Fourth: The commitment to conditions of legibility of using the new expressions. According to The main axes of our research, they are the following:

–  The Orient, Syria- Palestine- al-Quds in History: Some splendors of the civilization of human being and culture the first political, economic, social and cultural
revolutions The Ancient Arab Constructive World Order, The world Constructive
Arab-Islamic Order, globalization of culture, urbanization and civilization: The
world constructive impact: freedom of thought and loving the culture, education, science and scientific research.

–  Splendor the world human tendency and Overthrowing racism: the civilized human content of Arabism and Islam.

–  Palestine- al-Quds in History: The most important political stations: the ancient,

middle, modern and contemporary: Kingdoms of the “Hebrews”, “sons of Israel”, “Jews” and “Promise land”: truth or imagination? Beginning of the Palestinian existence: Naming Palestine between falsification and scientific truth. Station of  the Islamic-Arab liberation and the Ohda-Omarya, stations of the Arab-Islamic reign, stations  of the Foreigners Franks  till beginning of Arab modern history.  the Ottoman   stations and the colonial conspiracy till the beginning of the British occupation ,  the Zionist occupation after it  and  cascade Arab – Zionist wars.

–   Continuing of the resistance  against Zionist occupation.

–   Palestine al-Quds: Some of the racial Zionist terrorism, Some of the international reactions and some of splendors of the civilization of resistance: an appreciation letter to the championships of the Palestinian woman, the Palestinian intellect, the Internet, the Drawing, the poetry, the knighthood and  the music.

–  The conclusion: Palestine- Al-Quds and division of the world: Struggle of the  civilizations and the barbarism.

1- The pictures were selected carefully, in which the splendors of the Arab culture,
Palestine and al-Quds were expressed. And there is a focus on the woman for the
importance of the indication of features of her reality in this matter, and using
Palestinian maps that clear level of the expanded occupation of the Zionist
colonialism.

3- As an accompanying music of the presentation I put the Five Symphony of the
great  creative   Beethoven.

Finally, we hope that this research-presentation had fulfilled its objectives, embodying its starting points.

There are no reviews yet.

Be the first to review “Palestine, al-Quds in History” إلغاء الرد