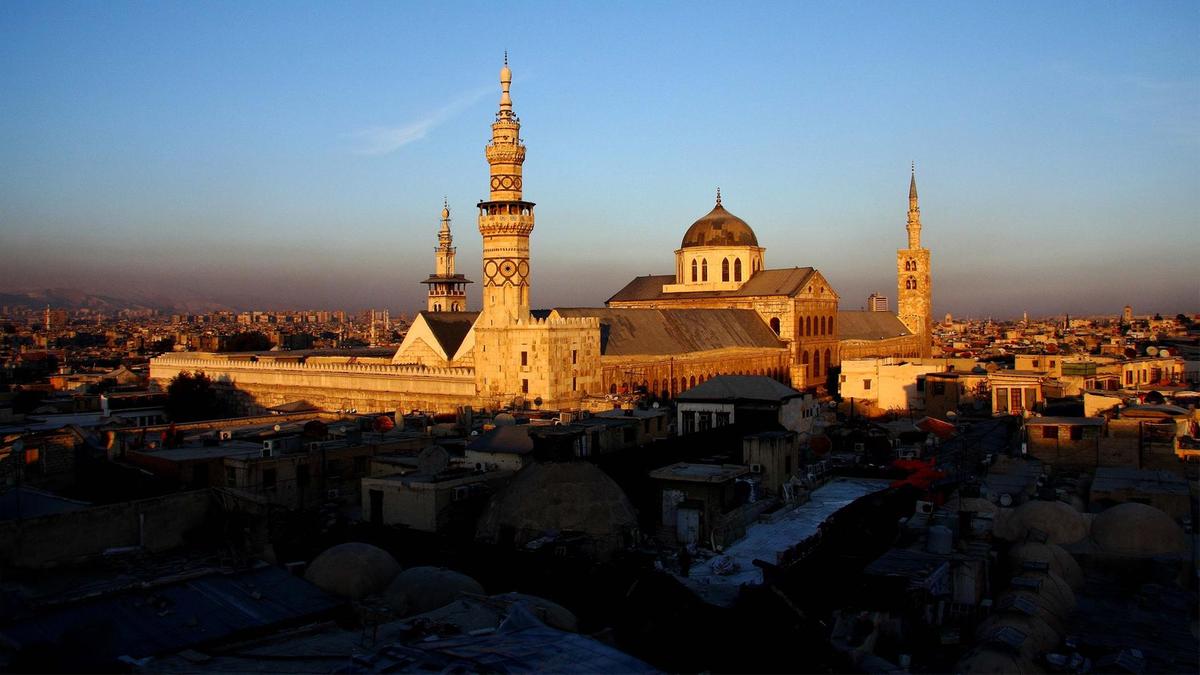 This title is for our book, which is in the form of PowerPoint presentation, and includes a historical  study documented with a variety of sources and important references, and based on careful scientific care on historical facts, to correct many of the amount of falsification that exists and is circulating in the distortion of our Arab history in general and Syria history in particular.

Specialty of human being and Culture givings”

This Video includes a historical  study documented with a variety of sources and important references, and based on careful scientific care on historical facts, to correct many of the amount of falsification that exists and is circulating in the distortion of our Arab history in general and Syria history in particular.

May be the most historical information that indicates to the degree of the importance of Syria, in rootage, human being and prestige, its  uniqueness that it is the only  country in  the world  that is still known  in its name since the ancient  ages, the second  millennium  BC. The  same thing  is  for  the uniqueness  of  its  capital Damascus, which is  the Capital of Arab Culture today, in 2008, it is the only capital in the world that keeps its name  since thousands  of years and it is the oldest capital in the  world. Alone, the study of history  clears what is this indication, on  the condition that this study  must  be documented,  objective and scientific.

Our  keeping  to  this  study   explains  our  starting  points  in  this  research, the  first is  the  correct  understanding  of the history which   is   the   movement   of  development   from  the  past,  through  the present  and  to  the future, in every moment  of the time  and  every  event in it, since  the  existence of   the homo- sapiens till  today.  Our  second  starting  point is  the correct understanding  of  the meaning  of  the   specialty  of  culture,  which  connects  with   the   meaning  of  the Civilization  with its direction  to serve the  human society in  all its  values  and its general good principles. Of course,  the basis  is always the homeland and the nation.  This civilization of culture is  what we  mean here in our subject about the specialty of the givings of human being and culture in the history of Damascus, which alone reflects this specialty in it, and  we follow  Its  most  prominent  characteristics  in  Damascus  since  its  beginning  till these times. The  third  starting point  is  our keeping,  in our  research  about “Damascus  in   history:  specialty  of   the   givings  of human  being  and culture”,  to  deal with  it, namely  Damascus, from firstly:  being a part  of  the Syrian  existence, and secondly:  of   the  Arab  existence,  in   their  connection with  the  Ancient  and Islamic Existence  from a side  and with the  international,  world  and human existence from other side. The fourth  starting point, the last one, is using Power Point program as a sound, picture and movement,  of what serving the information in  the research, here we like to indicate to the following:

1- The pictures  were  chosen  carefully in such a  manner that  expresses  about the
specialty  of the givings of the Arab culture, Syria  and Damascus during the ages. We
concentrate  on  the   woman  for  the  importance  of   the  indication  of  the
characteristics of her reality in this matter.
2- We  adopt  the  logo of the festivity of  Damascus  as  the Arab  capital  of culture,
because it  indicates to the variety, which is  the  characteristic  of  all  human
societies  and  which richens the society and serves in its development, of course
through its cultural unit. We use  the brotherliness of  the cross and the crescent as
an  expression about this variety, but not exclusively.

3- Nineveh (Ninawa) music was used  as an  accompanying music with the show, as
it is the most oldest note discovered on the international field  because it belongs to the  first millennium BC, so, it serves the subject of our research and its  objectives.

4- We used  the  Jasmine, Arabian  jasmine,  Rose  of  Damascus and  its  sword as
symbols for Damascus.

5- The candle was used as a symbol of  total giving; the lamp, book and libraries as
symbols of cultural  givings; the  scales  as  a symbol  of justice  and reasonable
balance;  the eagle as a symbol of  resistance and  power; the dove  is a symbol of
peace and the free bird a symbol of freedom.

6- According to using the movement, it was always functioned to serve an idea. It is
completely clear in the show.

Finally, preventing from accusing us with any exaggeration, there is a commitment  that our  references  in  clearing  the  specialty  of  Arab   culture  must be  objective western : German, French,  British  and  American…,concentrating  on the complete negation of the racial content of this culture and of the Arab  nationalism in  general, along with confirming on their  civilized  human content.

As a definition of the content of the book-presentation, we merely refer to its most important data:

–  Introduction: Content of the mentioned specialty: “The Civilization of Culture”.
–  Beginning of the civilization of culture in Damascus: Syria is the cradle  of human being and civilization.

–  Most prominent givings of  the specialty of the civilization  of human being and culture in
Damascus history during the ages:
1-  Correcting the falsification in the identity, beginning and level of development.

of culture in Damascus history:

A- Old ages before the Islam.

B- Economical specialty after the Islam.

4- Some of the specialty givings of the civilization of culture in Damascus history in
the field  of the international human data:
A- In the old ages: Globalization of urbanization.

B- Specialty of Damascene Arab- Islamic civilization: Continuity of the
globalization of   urbanization.

C- Some of the artist specialty  of givings of the civilization of the Damascene
culture.

D- Specialty of education, science, scientific research and libraries in the
Damascene    culture.

5-  Some givings of the specialty of the civilization of culture in Damascus in the
recent and   contemporary history:
A- The most prominent changes, specialty of resistance and refusing the
terrorism.

B- The miracle of Damascus.

1- Damascus and its sword: The reality about its name and its civilized content.
2- The Rose of Damascus- al-Faihaa.

There are no reviews yet.

Be the first to review “Syria – Damascus in History” إلغاء الرد